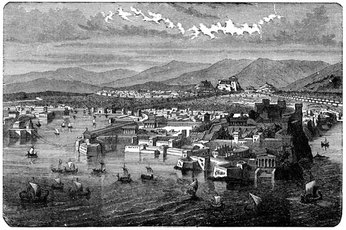 Sparta  or Lacedaemon, was a prominent city-state in ancient Greece, situated on the banks of the Eurotas River in Laconia, in south-eastern Peloponnese. It emerged as a political entity around the 10th century BC, when the invading Dorians subjugated the local, non-Dorian population. Around 650 BC, it rose to become the dominant military land-power in ancient Greece.

Given its military pre-eminence, Sparta was recognized as the overall leader of the combined Greek forces during the Greco-Persian Wars. Between 431 and 404 BC, Sparta was the principal enemy of Athens during the Peloponnesian War, from which it emerged victorious, though at great cost. Sparta's defeat by Thebes in the Battle of Leuctra in 371 BC ended Sparta's prominent role in Greece. However, it maintained its political independence until the Roman conquest of Greece in 146 BC. It then underwent a long period of decline, especially in theMiddle Ages, when many Spartans moved to live in Mystras. Sparta was unique in ancient Greece for its social system and constitution, which completely focused on military training and excellence. Its inhabitants were classified as Spartiates (Spartan citizens, who enjoyed full rights). Spartiates underwent the rigorous agoge training and education regimen, and Spartan phalanges were widely considered to be among the best in battle. Spartan women enjoyed considerably more rights and equality to men than elsewhere in the classical world 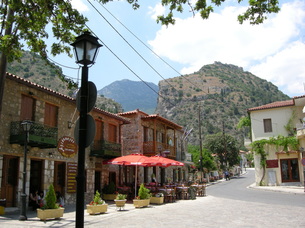 Mystras, the 'wonder of the Morea', served as the capital of the Byzantine Despotate of the Morea in the 14th and 15th centuries, experiencing a period of prosperity and cultural flowering. Reconquered by the Byzantines, then occupied by the Turks and the Venetians, the city was abandoned in 1832, leaving only the breathtaking medieval ruins, standing in a beautiful landscape. It is a UNESCO world heritage site. 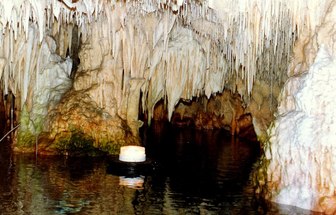 The Diros Caves are located approximately 12 miles south of Areopolis and they are part of an underground river. About 5,000 meters have been exposed and accessible by small boats and through narrow passageways. One is surrounded by formations of stalagmites and stalactites. Archaeological research has shown that the caves have served as places of worship in Paleolithic and Neolithic times and their inhabitant believed that the caves were the entrance to the underworld